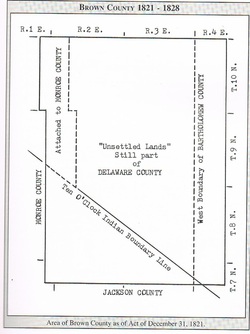 A HISTORY OF BROWN COUNTY

The United States acquired land from the Native Americans, part of which forms the southwest section of what is now Brown County, in the 1809 treaty of Fort Wayne. By the treaty of St. Mary's in 1818, considerably more territory became the property of the government, and this included Brown County land. No settler was allowed in the area until the government survey was completed in 1820.

The first white man known to arrive was a German, Johann Schoonover, who lived for a short time on the creek, later named for him, to trade with the Indians, about 1820. In that same year, William Elkins, the first pioneer, built a log cabin and cleared land in what became Johnson Township.

Many people came from Kentucky, Tennessee, Virginia and the Carolinas. They crossed the Ohio River and traveled north on narrow Indian Trails through dense hardwood forest with wagons drawn by oxen. Many made their way to Bloomington, then east to the hilly country, or they reached Jackson County and came north into future Brown County on the Sparks Ferry Road, or west from Columbus in Bartholomew County. Pioneers who had settled on lowland near Columbus came to the hills to escape malaria. Others deliberately chose the hills having lived in mountains before they made the trip to Indiana in search of new land. By 1830 an estimated 150 settlers had arrived; the United States census of 1840 reported 2,364 people.

By 1828 the Indiana State Legislature had divided the land of present Brown County between Monroe, Jackson, and Bartholomew counties. In 1835 settlers presented a petition to the Legislature requesting a new county. On February 4, 1836, both the House and Senate passed a bill providing for the formation from western Bartholomew, eastern Monroe, and northern Jackson counties of a county to be named Brown in honor of Major General Jacob Brown, a hero of the War of 1812. The county has 320 square miles, 16 miles from east to west and 20 miles north to south.

The first necessity was the election of officers to manage county affairs and to administer justice. Governor Noah Noble commissioned James Dawson as Sheriff and directed him to order an election of necessary officers. On the first Monday of June, 1836, John Floyd was elected Clerk and Recorder; James Taggart and Lewis F. Raper became Associate Judges; Daniel Hedrick, William Jackson, and James Davidson County Commissioners.

The three Commissioners in August, 1836, divided the land into the five townships of Jackson, Hamblen, Washington, Johnson and Van Buren. Nashville was chosen as the county seat. Banner C. Brummett was appointed County Agent to lay out Nashville in lots to be sold at auction. It was expected that money from the sale would help pay expenses of the county government. The lots sold very slowly, for pioneers had little money, and funds were very short for a number of years. In 1837 a log courthouse was built and the first log jail. They were built on the same lots on which the present courthouse and log jail stand. Nashville at that time consisted of a cluster of log cabins and 75 people.

The country was very wild in 1836. Bears, panthers, and wolves were plentiful. The wolves were so numerous and destructive of livestock that the Commissioners paid $1 for every wolf scalp brought to them.

Settlers lived a rugged pioneer type of life for many years. Their cabins and small settlements were mere niches in the great forest that covered hills and valleys. The men hunted deer, rabbits, squirrels, wild turkeys, and pigeons for food. As soon as enough land was cleared, they planted corn, potatoes, wheat, hops for yeast, flax and tobacco. Women made quilts, wove wool and flax into cloth, made the family clothes, carried water from a well or a stream, cooked food on open fireplaces, raised the children, and nursed them when they were sick.

By the time Nashville was incorporated in 1872, water-powered gristmills and sawmills were scattered over the county. Many villages dotted the County and were served by their own general store, a blacksmith shop, a church, and a post office. A doctor, sometimes more than one, lived in almost every village. In 1881 there were 20 doctors in the county, and 37 churches�Methodist, United Brethren, Baptist, Christian, Presbyterian, and New Light. Money continued to be scarce and much business was conducted by the barter system. The first schools were built of logs, but by 1872 one-room frame schoolhouses dotted the county; in 1900 there were 73.

People farmed but they depended on forest products for cash. Lumber was rafted South or carried to Indianapolis, also tan bark, cross ties, hoop poles, and barrel staves. The trees were cut recklessly and this led to deep trouble. Since there was not enough farmland on the ridge tops and in the creek bottoms, trees were eliminated on the sides of hills. Wheat and other crops were planted, and erosion began in earnest. By 1900 the top soil was so completely eroded from hillsides that crops could not be grown. Poverty was widespread and people began to leave the county in droves. Cabins all over the hills and valleys stood empty. In 1890 10,308 people lived in Brown County. By 1930 only 5,168 remained. Not until 1980 did the population exceed the 1890 figure.

In 1900 villages were still the centers of Brown County life. Travel by horseback, wagon, or carriage was exceedingly limited due to deeply rutted, rocky roads. There were people in remote areas who never made a trip to Nashville in their entire lives. Many a family's only contact with the outside world was the huckster's weekly visit with his horse and wagon. As a result, the pioneer way of life continued long after other counties had adopted a new pattern of living.

In 1905 the Illinois Central Railroad built a line from Indianapolis to Effingham, Illinois. The line ran from Morgantown across the southwest corner of Jackson Township. Helmsburg was the main station. Two trains a day from Indianapolis, and two from Effingham, brought freight, mail and passengers. Horse-drawn hacks took people, and wagons transported mail and freight from the station to Nashville.

With improved transportation, Brown County was opened to the world.

The first cars appeared in Nashville in 1913 and 1914. Their use was strictly limited because of the very bad roads, but by necessity as the number of cars increased, county roads were gradually improved. By 1935 State Road 135 North from Nashville to Morgantown had been built and in that year was hard-surfaced. State Road 46 between Bloomington and Nashville was worked on extensively until it was considered one of the best gravel roads in the state. Some years later it was hard-surfaced. Access to the county had become adequate for cars and trucks.

A colony of superb artists was drawn to Brown County. In 1907 T.C. Steele built a home near Belmont, and Adolph Shulz came to Nashville. Will Vawter, V.J. Cariani, Marie Goth, C. Curry Bohm, Dale Bessire, and many others also moved to Nashville; and in that small village of 323 people the Brown County Art Gallery opened its doors to the public in 1926. In 1954 a larger gallery was built on East Main Street, and an Art Guild established a gallery in the old Minor House on Van Buren Street.

The Brown County State Park opened in 1931 offering many advantages: a lodge, cabins for rent, picnic areas, a swimming pool, and miles of trails. And at present there are Yellowwood State Forest, the Hoosier National Forest, Lake Monroe, and Lake Lemon.

These changes and additions have brought tourists literally by the millions to Brown County. Scores of shops have opened to entice tourist trade. Restaurants and motels cater to tourist needs.

And Brown County has become a recognized and valued retirement center.

At present there are 232 productive farms. The erosion that drove people out of the county has been almost entirely eliminated. Improved farming methods and reforestation have solved the problems with the help of government agencies, such as the Agricultural Stabilization and Conservation Service.

During the Centennial celebration of the founding of Brown County in 1936, when for the first time oxcarts were no longer a familiar sight, it was generally agreed that the county had come out of the wilderness. Certainly there has never been a return to the former isolation. 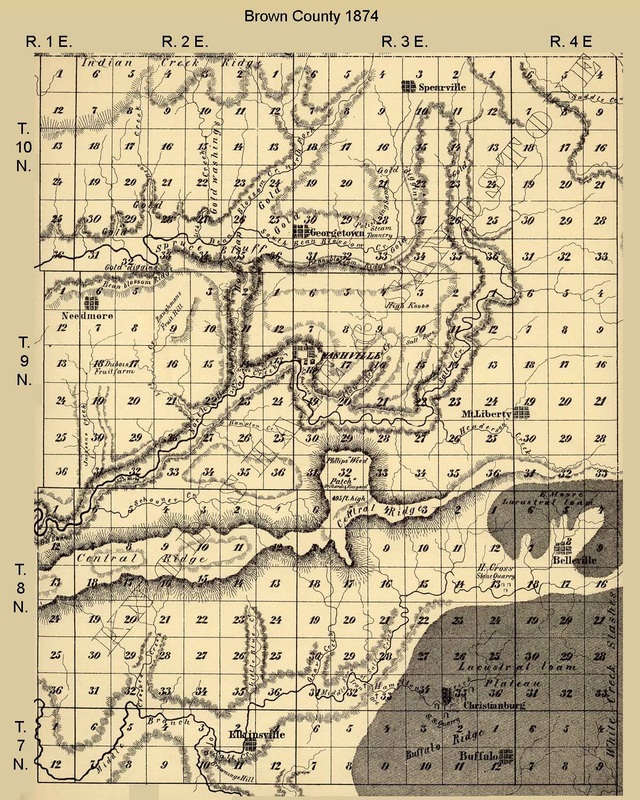