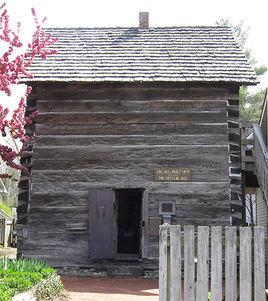 The last sentence of an order of the Brown County Commissioners in 1837 for construction of a jail stated: “Build her good and solid.”
Listed in the National Register of Historic Places, the original Log Jail was built in 1837, but by 1879 had deteriorated to the point it had to be replaced.
The first jail was built in 1837 for the cost of $175. Built by William Snyder James Taggart. With the intention of escape-proofing, the only entrance was an outside stairway that led to the upstairs. The sentenced men were deposited through a door in the upstairs floor by a rope ladder, which was then pulled up sans prisoner.
In 1876, another added layer of logs made the walls 54” thick.
A major reconstruction project was undertaken in 2015.  The contractor for that project was none other than Bird Snyder, the fourth great grandson of the original builder William Snyder.